Hello friends, how you been?

Ok so last night I finished the film Food, Inc. If you haven’t seen it, I so recommend it. Warning, it’s not for the faint of heart. I am not here to tell you how to eat, but to tell you how this film really affected the way I see food. 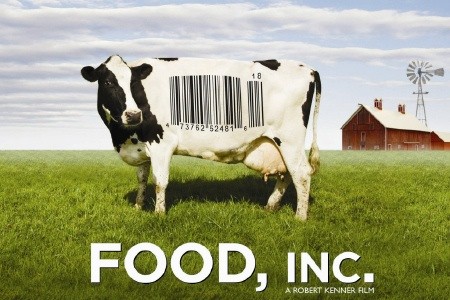 Here are just a few things that I learned:

Mr. Pollan and Mr. Schlosser discussed “Wal-mart” and its recent 5-year plan to reconstruct their packaged goods to lower fats, sugars, and sodium. Obviously they are anti-big corporations (not a surprise), but they both also admitted that Wal-mart, as the biggest grocery store in the United States that feeds 40% of America, holds a lot of power in the food world. That’s CRAZY! In the film you see the fact that Wal-mart is recognizing a need to make some changes, good news! But the fact that it still has so much power is Bad news.

Basically, practically everything we eat right now has been monopolized by major food and farm corporations…which allows for cheap food, but at the risk of our personal health. You see workers being treated poorly and immigrants working for these companies only to be arrested years later.

I agree that it’s sad that 4 meat-packing industries can feed the vast majority of America. As history has proved, unchecked, incredible power can be extremely corruptive. Oh, and if there are only 4 meet-packing industries out there, then your really just buying the “label”.

I also find it shocking that 75% of what American farmers grow go to feeds for livestock (which are raised in horrible conditions), and that 50% of human food products are wasted.

It’s also insane that Monsanto—a company known for producing toxic substances—can have so much control over what we eat. A little too much power in my opinion.

I love this quote “It’s just so ironic that America, one of the most democratic nation in the world, has the least democratic and free-market capitalism in food—which, essentially, enters our mouth and becomes who we are.”

You can start obsessing about buying local produce and organic everything. As Mr. Pollan said, you can now buy organic apple juice that has the fine print: “Made In China.”

In addition, as both Mr. Pollan and Mr. Schlosser admitted, the current food system feeds two types of groups:
1) the wealthy, and
2) the vast majority of average citizens who can’t afford to get organic eggs, raw milk, and personal trainers.

However, that is also because they simply “don’t know…or worse—they know, but are daunted by the complex, multi-layered problem of politics, ethics, and economy.”

“We are a culture of irony and cynicism,” Mr Pollan said. “There is an utter lack of faith that yes, we can change. Compared to toppling dictators, this is nothing—so why are we so intimidated?”

He added: “Under social pressure, these companies (Monsanto, ConAgra, Wal-mart, etc) will have no choice but to break down and allow governmental regulations.”

The discussion, would very INFORMATIVE TO ME. Did I understand it all, NO! But I, want to be informed.I understood the dire situation of the abysmal food production and consumption in America. I mostly agreed with what Michael Pollan and Eric Schlosser said.

So where do I lie? For the greater good of mankind and the earth…or for my own personal mental health?

To eat, or not to eat…that is the question.

“Knowledge is a burden,” Mr Pollan confessed. Of course, he was quick to add that he also finds great joy in a piece of grass-fed steak.

“The food movement will only get so far unless people start cooking again,” Mr Pollan said, ever so wisely. “Cooking is the solution to the problem of how you can start eating well.”

What Mr Pollan said made me understand better, since I do cook and bake a lot.It makes you appreciate food other than just calories and nutrition..

I am just so torn about eating organic foods, but do know that now I only want to eat Grass Fed Beef. We rarely eat beef in our house, but after seeing this movie I have had a big change of heart. I would really like to just give up meat all together, but Hubby might have my head 🙂

1. Buy organic or sustainable food with little or no pesticides.

3. Make a point to know where your food comes from? READ LABELS.

We all need to find a healthy balance somewhere, somehow. Currently at the moment have a lot to digest, and mull over.

I know this my interest and I know a lot of people just don’t care or think that eating organic and homegrown food can be unrealistic. To each his own.