Discalimer: Please excuse any spelling or grammatical errors, I am a runner not an English major:)

This past weekend was a true adventure. Rachel and I took off on Friday morning and headed out on own little “Girls Getaway Marathon Tour”. It was a 6 hour drive from Redlands to St.George Utah, with a couple Sbux trips on the way:) Our first stop when we got to St. George was the Expo. We walked in got our race info and such and then DID the Expo. We were talked to by lots of folks about all of these different nutrition drinks that they had (which of course they thought were better then everybody else). I bought a cool hat by Gas Cap, it was a hat that carried all of my gels, very convenient, and I got a cute St.George T-shirt.

We arrived at Comfort Inn Suites, our home for the weekend and started preparing mentally and physically. We laid out all our gear, did a double check of everything twice, then got in the car and tried to find a place to have dinner. St.George has a population of 100,000 but the town is small, so we thought for sure we could find a restaurant somewhere. We were a little picky because this was going to be our pre-marathon meal and we wanted healthy not junk. After an hour of searching we finally found something that would have to do, Chile’s. I had a guiltless chicken sandwich with a corn on the cobb and a dinner salad. It was light but filling at the same time. We then headed back to our hotel to get some MAJOR shut eye.

I was worried if I would sleep ok, I didn’t want to be tossing and turning because I was thinking of the race and because I knew we were only getting 5 hours of sleep. I woke up once in the middle of the night to go pee and at the same moment Rachel came in the bathroom and it was dark she saw me and screamed..lol..So ironic that we both woke up at the same time to go pee! Then I couldn’t go back to sleep I was awake. Finally we rolled out of bed at 3:30am got dressed and we walked down to the lobby for the runner bfast. I brought my own oatmeal filled with vanilla protein,dried fruit antioxidant mix, walnuts, and a banana. I didn’t eat the whole thing I was too worried I would get sick. The big fear of the morning was that I wouldn’t be able to go to the bathroom(if your a runner you know what I mean). I DID go, so my fear was gone.

We loaded up on the hotel shuttles which then took us to the marathon buses. On our ride up to the starting line we spoke with some St.George marathon veterans. They told us about their past races, and others they had done all over the country. When we stepped off the bus we felt it start to drizzle, I wasn’t worried at first because the forecast did say it would rain a little. Well it wasn’t a little it was A LOT! The wind was the worse part, I had no idea this is the weather we would be running is. We got some trash bags, and gloves and went straight over to the bond fires. They had rows and rows of fires with 6,000 people all hovered around. We found our third running buddy Meagan, and tried to stay warm. The staring line was very organized, they had everything form A-Z prepared for us. They had a great wall of China row of porta potties, so nice for those last minuet urges.

Our clocks hit 6:40am we threw all of our warm ups in to a bag, tossed them in the U-haul trucks and went straight to the starting line. Now I could walk you through the entire race, but I do not want to bore you with every little detail, so here are my highlights: 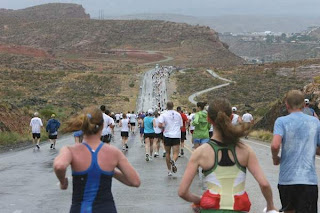 Miles 1-3: The first 3-4 miles was completely in the dark, no lights, slick roads, all I have to say is dangerous but an experience none the less. I had my Ipod blasting some Timberlake, and was on my way to a good start.

Miles 5-7: I saw the 3:30pacer, which was good because I started about 3 minutes behind him and sense we were wearing a chip I knew if I stayed with him my time would be a little under 3:30. He was chatting with everyone which made the run a little more fun, but this was MY race, I didn’t’ want to get lost in someone elses pace, I wanted to listen to my body and go at my speed. So at mile 7 we hit Vail hill which to tell you the truth was nothing compared to most the hills I have run in Yucaipa or Redlands. I looked down about five paces a head of me, lowered my arms, powered up and said goodbye to my pacer dude.

Miles 7-11: I took my first Hammer Gel at 7, through the wind in the rain it was hard to tell if I was drinking enough. When you can’t feel your sweat it’s hard to know how hydrated you are but I kept sipping on my Heed every two miles or so. They had a water/Vaseline/Gatorade/iceyhot stop every two mile. I never needed anything but it was nice to have a crowd of folks cheering you on. 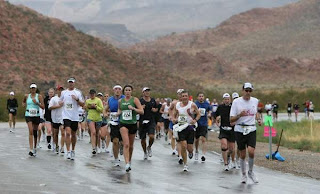 Miles 11-15: It was a constant rolling of hills, which was nice because when you are pounding your feet down hill it’s nice to have a break going up and flat. I didn’t like looking up though because it looked like the road was never ending so I prayed a lot for the people to the left and right of me, tried to look at the beautiful red rock, but with the rain it wasn’t all that nice.

Miles 15-19: I started to get emotional, I had broken the runners wall my legs were flying down hill like crazy felling good and I was wanting to cry. This was it, this is what I have been training fourmonths for. What I have gotten at 4 am on Saturday mornings for. What I have sacraficed sleep and eating out for. I could hardly believe I was doing so great. My Garmin was telling me I was right at pace, but I had learned how to listen to my body and know that I was right on target. My Ipod was playing Chris Tomlin’s “How great is our God” song and as I looked up into the clouds I almost lost it. I started hyper ventilating a little so I pulled myself together and took some major deep breaths (just typing about this moment makes me teary eyed). 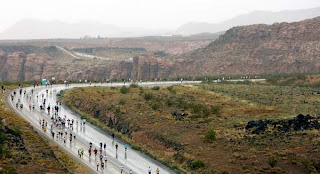 Miles 19-24: People lined the streets of St.George, rain, wind, and all they were still supportive. I knew that some of their loved ones were out here, and they wanted nothing more to suffer with them, at that point I wished I had someone out there cheering for me, but I knew I did have someone cheering me on from home! I started to pick up the pace a little and realized I still had 7 miles to go so I need to finish well and just keep a steady pace, I backed up a little and took it easy. It was hard not to want to run past someone (that’s the competitive side of me) but I kept telling myself “RUN YOUR OWN RACE!”.

Mile 24-26.2: I turned off the Ipod and listen to the crowd cheer us on. I was soaked from head to toe, not just with sweat but from the rain. I had had three gels, two bottles of Heed, this was it, the final stretch… Emotions took over me like crazy but I couldn’t give in I was there and I didn’t want to start crying because I would have trouble breathing, so I gave myself a mental note that I could cry all I wanted once I past the finish line. We turned the corner at mile 25 and I started giving my last kick I was right at 8min, I knew was going to qualify for Boston as long as I didn’t quit. Everyone was screaming “Your almost there it’s just around the corner!”. I didn’t believe them so I asked this guy running next to me (he looked like he had done this a time or two before) “is it really just around the corner?” he said, “yep were almost done”. That’s when my heart started pounding my eyes filled up with tears and I ran my heart out. I saw it, the big FINISH banner, I was there. I crossed at 3:29! (My actual chip time was 3:24! )As soon as we were about 300yards from it I sprinted as hard as I could passed 4-5 runners and a tear fell and so did my heart. 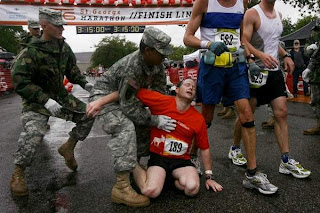 The Finish: I walked through the shoot had a protein bar, and quickly wished that hubby was here to catch me to congratulate me, to hold me. I walked to the massage booth and couldn’t stand so I sat on a bench next to two runners I had never felt my legs cramp that much in my entire life. I was hurting. I knew if I sat there it would just get worse, so I got my bag of clean cloths went to the bathroom and tried to change. It was difficult because my body was still in shock. I have never been alone after a race, hubby always is there to help me think straight and get myself together. It took me a while to re cooperate but when I finally did, I saw Megan and Rachel. Meagan got a 3:49 which was great, and Rachel a 3:50! I was so proud of us all for finishing without any injury’s or accidents. Final stats; out of 3,000 women I came in 100th place beeting 83% of all males! I ran a 7:40pace!

That night Rachel and I had some major celebrating to do! We ordered a pizza and drank some Pumpkin Ale for lunch and snack, shopped (hobbling) got a massage, watched a movie, then went out for Thai food:) It’s been an amazing experience, and I wouldn’t have done it without the support of my hubby, running buddy, and all my wonderful amazing friends! Boston here I come!